My eyes filled with tears as my hand came up to cover my mouth. My stomach twisted in a sick mixture of horror and sorrow. My heart ached. I couldn’t breathe. I couldn’t believe what I was reading.

“I worked the 11 p.m. to 7 a.m. shift, and when we weren’t busy, I’d go out to help with the newborns. One night I saw a bassinet outside the nursery. There was a baby in this bassinet – a crying, perfectly formed baby – but there was a difference in this child. She had been scalded. She was the child of a saline abortion.

This little girl looked as if she had been put in a pot of boiling water. No doctor, no nurse, no parent, to comfort this hurt, burned child. She was left alone to die in pain. They wouldn’t let her in the nursery – they didn’t even bother to cover her.

I was ashamed of my profession that night! It’s hard to believe this can happen in our modern hospitals, but it does. It happens all the time. I thought a hospital was a place to heal the sick – not a place to kill.

I asked a nurse at another hospital what they do with their babies that are aborted by saline. Unlike my hospital, where the baby was left alone struggling for breath, their hospital puts the infant in a bucket and puts the lid on. Suffocation! Death by suffocation!”

I couldn’t even finish the article, I just sat there and cried.

In pain?
Scalded?
Struggling for breath??

I’ve seen lots of posts about abortion and Planned Parenthood lately, but this article I read a few days ago…..it completely ruined my day. I haven’t stopped thinking about it since. I can’t just sit here and do nothing.

To be honest, I’m not really sure what to do.

I’m typically not the kind of person to engage controversial topics online. I don’t want to carry a reputation as an emotionally brash protester/complainer instead of an intelligent, logical person capable of calm discussion, and I think conversations like that are better in person anyway. Something about this topic, though…when I read that article, I wanted to throw up. No one should be able to be indifferent about this. I can’t. I can’t read about tiny little LIVES being brutally ended and have no reaction to it. I also can’t be hateful because I have dear friends who have had abortions, and they are as loved, redeemed, and cherished by God as I am. But it’s not enough to get political, rant about how abortion should be illegal, and go on about my day, proud of myself for speaking up about something. It’s just not enough. 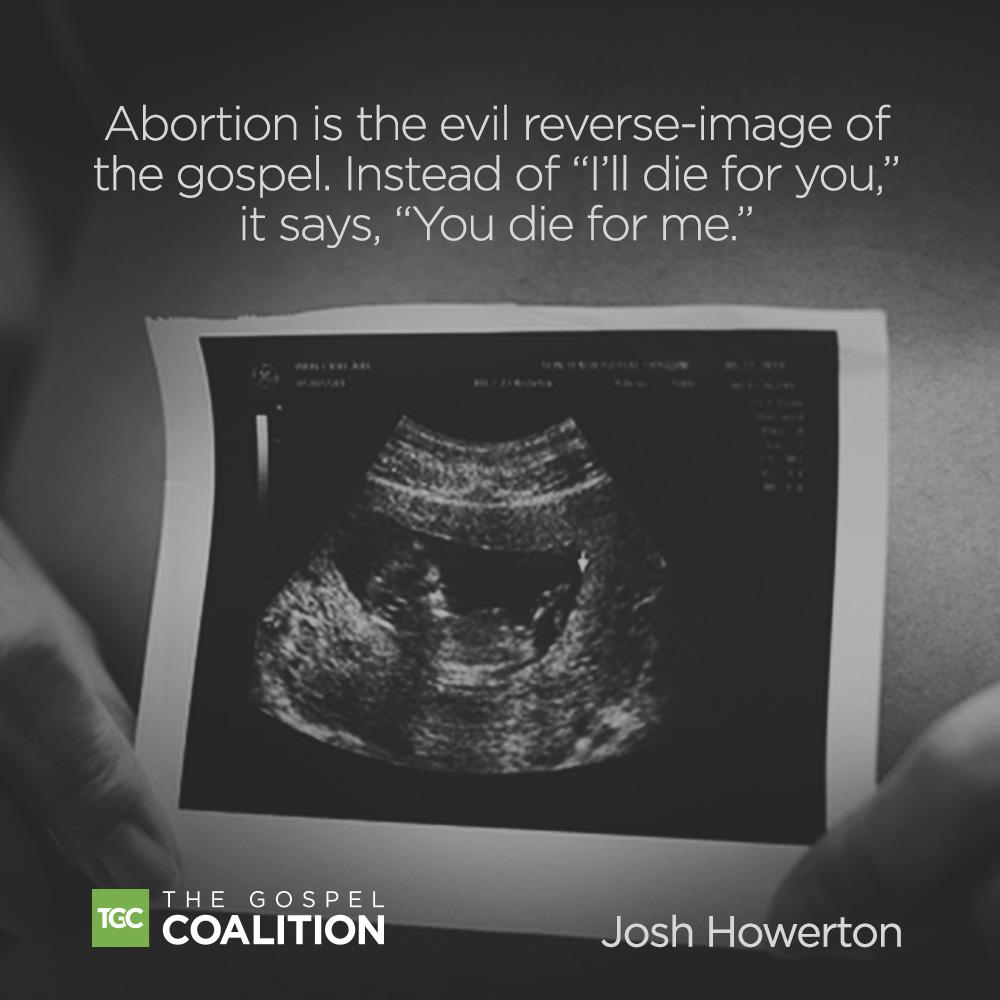 Abortion is selfish. Abortion is sin. It’s one of the biggest pieces of proof showing just how far we have fallen below the standard God set. When did we become so desensitized to violence that we decided killing helpless babies was a good idea? Above all, this is a Gospel issue. Every sin we commit communicates that we think God cheated us. Abortion is wrong because it is a direct offense to the God who created every person on earth, including the unborn ones.

I think the thing that hurt me the most about that article was this portion:

On the night [an] aborted baby came in, three premature babies from a nearby hospital were being taken care of. Two of the three were in danger of dying, and doctors struggled to save their lives. While the doctors were engaged in the struggle to help these two wanted babies, the aborted baby was brought in:

“I looked at the baby boy lying before me, and saw that from all appearances he was perfect. He had a good strong heartbeat. I could tell this without using a stethoscope because I could see his chest moving in sync with his heart rate. With a stethoscope I heard a heart pumping strongly. I look at his size and his skin — he definitely looked more mature than 23 weeks. He was weighed and I discovered that he was 900 grams, almost two pounds. This was almost twice the weight of some babies we have been able to save. A doctor was summoned. When she arrived the baby started moving his tiny arms and legs flailing. He started trying to gasp, but was unable to get air into his lungs. His whole body shuddered with his efforts to breathe. We were joined by a neonatalist and I pleaded with both doctors saying, ‘The baby is viable — look at his size, look at his skin — he looks much older than 23 weeks.’

It was a horrible moment as each of us wrestled with our own ethical standards. I argued that we should make an attempt to resuscitate him, to get him breathing. The resident doctor told me, ‘This is an abortion. We have no right to interfere.’ The specialist, who had the responsibility for the decision, was wringing his hands and quietly saying, ‘This is so hard. Oh, God, it’s so hard when it’s this close.’ In the end, I lost. We were not going to try to resuscitate this baby. …I wrapped him in blankets to keep him warm, and held him. These were the only measures I could take comfort the baby under the circumstances, no matter how much I wanted to do more.”

Ironically, all the while the nurse was holding the dying aborted child, doctors were struggling to save the life of another premature (but wanted) child in the very same room, less than five feet away. Sadly, this baby died as well – but she was given every possible medical treatment, while the aborted baby was completely ignored.

That last paragraph just killed me. The only difference between those babies is that one of them was wanted. I remember taking a pregnancy test (who am I kidding, I took like 9) in our first year of marriage and panicking a little because I didn’t feel ready to have a baby yet. But it would never even occur to me to get rid of it just because I wasn’t ready yet. How much more selfish can we get than ending another human’s life because we don’t WANT them?? Or because it is what’s ‘best for us’ at the time? Regardless of your moral convictions, you have to admit – the numbers are staggering.

Please don’t misunderstand: I don’t just care about the babies! I am not cold, rude, or uncaring when it comes to the moms, not even a little. As I mentioned earlier, I know women who have had abortions – it is by no means an easy choice or something they enjoyed doing. I know very well that there’s much more involved in many cases, and some of you probably want to ask me:

“What if the pregnancy was from rape/incest?”
I can’t even explain how much my heart breaks for women who experience this. More than anything else, a woman who has been assaulted needs to be surrounded with love and comfort, especially by people in the church. But if a pregnancy occurs from that assault, aren’t there two people now who need love and support? The emotional effects of that situation have to be addressed logically. Her memories and grief won’t disappear with the aborted baby. The innocent baby isn’t to blame and shouldn’t be punished for the horrific crimes of the father (who SHOULD be persecuted).

“What about if the life of the mom is in danger?”
Actually, less than 1% of abortions are performed to save the life of the mother (source). In the case of cancer or an ectopic pregnancy…dude, I honestly don’t know. My gut says don’t abort the baby, but I can’t imagine the pressure and stress of making that choice. I’m still struggling through that one.

“So no one should have abortions, then? What happens to all those children?”
Great question. Church? Want to take this one? How about we step up and take care of them? How about if we come around struggling moms and serve as an encouraging support base for them instead of chasing them out for their blatant immorality? What if we were willing to adopt some of those children if the moms truly aren’t in a position to take care of them?

I want to have kids. I don’t know when they’ll join me and Daniel and fill up our house with messes and fun and noise and life, but I want them. If someone reading this is contemplating abortion, for whatever reason, please don’t kill your baby. It’s not a lump of cells. It’s a baby. A created-and-loved-by-God baby. Give her to me. Give him to me. “Please don’t kill the child. I want the child. Please give me the child. I am willing to accept any child who would be aborted” (from Mother Theresa’s address at a United Nations conference in Cairo, Sept. 1994). For those of you wondering if I’ve lost it, yes, I did talk to Daniel and he’s 100% on board. Sure, we might not have kids yet, but maybe some of our kids will join us in an unconventional way. We will gladly receive any baby and either give him/her a home or find him/her a home.

It’s important to remember that we ALL need Jesus desperately. I have no room to get  self-righteous, because my sin is just as evil and offensive to Him. God’s forgiveness and compassion extends equally to ALL of us. Praise Him for making a way for us to come to Him and be rescued from everything we’ve done wrong, no matter what it is. My heart hurts so much for anyone who has had an abortion or considered having one. If you are one of those women, there is no hate or judgment in my heart toward you – just love. For my friends who I know have experienced this – I love you more than words can say. God has redeemed you, and He does not condemn you. Don’t condemn yourself. ♥

There are so many resources on this topic that I could spend days listing them, but I thought these few were a good place to start.

God, forgive us. Help us love others the way You love us.

F I N A L L Y putting up the tree! 🎄 @lifewithlopez I’m putting my garage sale find to good use 😉
New guy moved in and made himself at home, what should I name him?? 🐾
My people. ❤️❤️ The perfect pair!
🤍🌸💍
This place is PERFECTION 🍂🪴
I’ve been trying to get my thoughts together about this wedding. Still only one word is good enough:
Pure joy. 🤍🤍 #Graytestvacay
🍂🍁🐾
“Have you ever wished you could hug God? I have. Many times. In moments of sadness and joy, I have felt my heart swelling AND tightening, somehow at the same time, still too small to hold all of my feelings. But I never really realized that a hug was what I wanted until March 10, 2022.” Link in profile for the rest.