Oddly enough, having a dog is exactly what I thought it would be and nothing like what I thought it would be, all at the same time. I know it sounds weird and confusing, but it’s just true! I spent almost 26 years of my life wanting a dog, and I felt exactly as excited as I expected to feel when we got Fitz. And yet my expectations for what it would be like to actually own a dog haven’t always been accurate. I’ve been surprised by how many different feelings this furry tornado has made me feel – everything from shock, to disgust, to anger, giddiness, pride, intense worry, and – of course – unbelievably fierce love.

Like I said, I always wanted a dog. I asked for one for my birthday every single year until I went to college. (Sidebar – for my 16th or 17th birthday, I asked for a car, a dog, and a phone. And I got a Hot Wheels Car, a stuffed dog, and a plastic baby phone. Thanks Mom and Dad.) But even after all those years of dreaming, I never thought I would get overly attached to a dog before Fitz came home to live with us. I poked fun at people who called their dog their ‘best friend,’ and don’t even get me started on the people who call them their ‘babies’ or their ‘children.’ But I found out how much Fitz actually mattered to me on the day he pulled the leash out of my hands to chase a stray out of our front yard and I thought I’d lost him for good.

To give you some context: we didn’t get Fitz when he was a brand new puppy. He didn’t come to live with us until he was about 7 months old, so while we TRIED to crate train him and teach him how to take walks like a normal dog without pulling our arms out of our sockets, it was much more difficult than it would have been starting with a younger puppy. He is incredibly strong, and although he has a really nice harness that he can’t pull himself out of, he can pull the leash out of my hands, and there’s not really much I can do about that. Anytime he has gotten loose, he just runs. He’s not a good listener once his mind is set on something across the street, especially if it’s another dog. So I’m not exaggerating when I say that when he jerked the leash out of my hands, I’m pretty sure my heart literally stopped beating. I truly can’t remember another time in my entire life when I felt that panicked about anything. I ran barefoot across our front yard that was covered in stickers without even feeling them. I had to stop zooming down our driveway to make myself breathe normally and keep from hyperventilating, because it was getting dark and I had heard the sound of a car swerving down the street just seconds after he ran off. Worst. hour. of. my. life. Thank God for a tribe of friends who were willing to drop whatever they were doing, hop in their cars, and help me look for him. Thank God that my friend Alesha found him and somehow – seriously, by God’s grace alone – managed to get him in her car.

That hour proved that I really did fall in love with Fitz. I had no clue how much of my heart he had stolen until I thought I would never see him again. I never could have guessed, when we got him almost two years ago, that I would fall totally in love and would continue to love him even though he ripped up all of our outdoor furniture cushions, has shed enough hair to cover about 57 other dogs, and NEVER stops begging for a bite off of our plates (and steals bites when we aren’t looking). I can’t really remember life without him, and even though he’s a pretty terrible roommate, I wouldn’t trade him for all the money in the world. 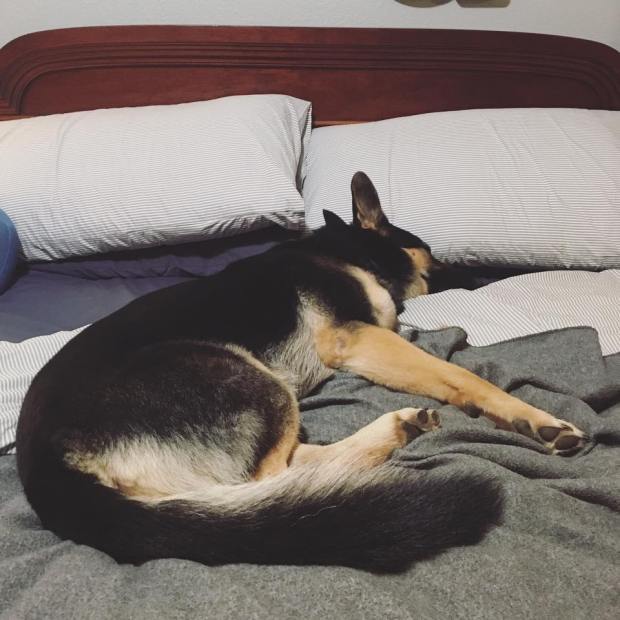 HI FEBRUARY 🤸🏻‍♀️🤸🏻‍♀️🤸🏻‍♀️
On this day, in 1958, my grandparents said “I do”, and they have never stopped saying it.
Copy and paste and Cory’s hateful face 👯‍♀️
My word for the year was S A V O R . And dang it, I did. Ciao, 2022! ✌🏼❤️
"I realized that my internal thought process about the future was no longer 'When we have a baby.' It had shifted to 'If we have a baby.' My mind was begging my heart to catch up to what my body had been trying to tell me for more than seven years, to accept the reality that biological kids might not be part of the plan. ...Getting married and having babies was Plan A. I had no backup plan. How do you let go of a dream you’ve had since you were five years old? Could I really accept childlessness as a gift from God, instead of the soft, blue-eyed, rosy-cheeked gift I thought I wanted?"
This month, we’ve lived in our house for seven years. And our upstairs HVAC unit decided now would be a great time to kick the bucket. But instead of being angry, I am THANKFUL, because God knew that this Siberian cold front was coming, and in His mercy, He allowed us to discover the problem last week instead of this week. 😮‍💨😅 We weren’t expecting a big expense like that right before Christmas, but God took care of that too.
I attended my first adoption hearing today. What a blessing it was! 🧡💛 They’ve been a family of five for awhile now, but it felt so weighty, hearing a judge make it official in such a formal setting.
There’s just something about velvet 💋
Merry Christmas to the guy whose home now houses FIVE pianos (and a pipe organ) (and who knows what’s hiding in the garage) 🤘🏼🤘🏼