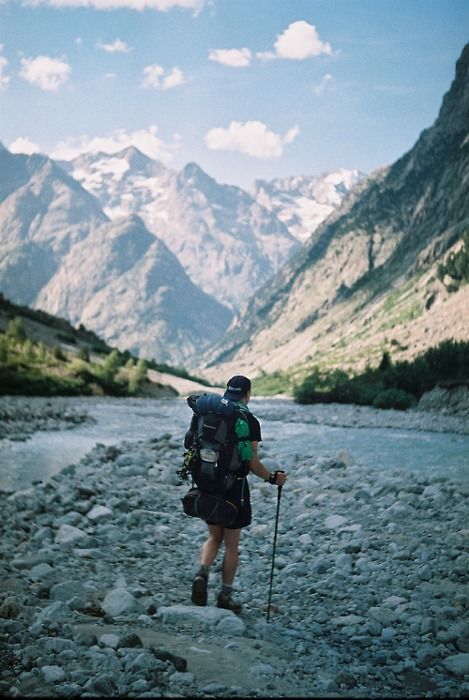 I had a moment with the Lord today, on Pinterest of all places.

I was looking through my friend Jordan King’s boards, and since I was in a particularly wanderlust-y mood, I went to her ‘Adventure’ board. As I scrolled, something about the photo above caught my eye, so I stopped and clicked on it. As I looked at it more closely, a quiet, whispered thought filled my head:

Let’s just clarify now that I know absolutely nothing about hiking. And up to this point, I really haven’t had any desire to learn anything about hiking. I’ve heard enough stories (including the one about Daniel’s four-day, rain-soaked, 40-pound-pack nightmare on Eagle Rock Loop) to know that trekking uphill for hours on end doesn’t sound quite like my cup of tea.

But for some reason, I couldn’t take my eyes away from this picture.

Who knows when that photo was taken? It could have been right as he reached his destination, or it could have been before he even started his journey. But regardless, it’s obvious that he is ready to work. He’s got the boots, the pack, the poles – he knows this is going to be more than a leisurely stroll. He’s prepared. And he’s willing to put in the time and effort because he knows what’s coming at the end.

It has always amazed me that God has the ability to speak with a still, small, quiet voice, and yet it has the impact of a strong, powerful, roaring voice that you can’t ignore. I stared at the mountains, the river, the rocks – dumbfounded. How many beautiful places have I never seen because I haven’t WANTED to hike to them? A simple thought, but a dagger to the heart.

How many times had I given up on something because it just felt too hard to do?

How many times had I not even attempted something because it sounded like too much work?

How many times had I been unwilling to put in the effort for something I knew would be beneficial in the long run?

It’s no secret that I struggle with self-discipline, especially when it comes to maintaining a healthy lifestyle, but this truth bomb really hurt. Genuinely mature adults are willing to not only work, but work HARD, and they don’t make excuses like ‘I just don’t want to’ and ‘That’s just how I am’. 1 Corinthians 13:11 really drives this point home: “When I was a child, I spoke like a child, I thought like a child, I reasoned like a child. When I became a man, I gave up childish ways.” Did you catch it? That action verb, gave. Maturity didn’t simply happen naturally. A decision was made to give up childish ways. We aren’t doomed to stay exactly the way we are for the rest of our lives, but we can’t just sit around and wait for magic lightning to strike us and make us grow up. True adults recognize that their actions affect people they love, and they take responsibility for figuring out what parts of their character are ugly, lazy, or immature, and then learn how to fix them.

But isn’t that exactly how life is supposed to be? Why are we so surprised when something requires work from us? After all, pretty much everything good in life comes as a result of a lot of time and effort:

None of these things happen without a lot of perseverance and commitment, and they will always require a sacrifice of self – your time, money, energy, emotion, and preferences. All truly good things will cost you something. Maturity means deciding that those ‘good things’ are worth the hike.

2 thoughts on “Are You Willing to Hike?”

HI FEBRUARY 🤸🏻‍♀️🤸🏻‍♀️🤸🏻‍♀️
On this day, in 1958, my grandparents said “I do”, and they have never stopped saying it.
Copy and paste and Cory’s hateful face 👯‍♀️
My word for the year was S A V O R . And dang it, I did. Ciao, 2022! ✌🏼❤️
"I realized that my internal thought process about the future was no longer 'When we have a baby.' It had shifted to 'If we have a baby.' My mind was begging my heart to catch up to what my body had been trying to tell me for more than seven years, to accept the reality that biological kids might not be part of the plan. ...Getting married and having babies was Plan A. I had no backup plan. How do you let go of a dream you’ve had since you were five years old? Could I really accept childlessness as a gift from God, instead of the soft, blue-eyed, rosy-cheeked gift I thought I wanted?"
This month, we’ve lived in our house for seven years. And our upstairs HVAC unit decided now would be a great time to kick the bucket. But instead of being angry, I am THANKFUL, because God knew that this Siberian cold front was coming, and in His mercy, He allowed us to discover the problem last week instead of this week. 😮‍💨😅 We weren’t expecting a big expense like that right before Christmas, but God took care of that too.
I attended my first adoption hearing today. What a blessing it was! 🧡💛 They’ve been a family of five for awhile now, but it felt so weighty, hearing a judge make it official in such a formal setting.
There’s just something about velvet 💋
Merry Christmas to the guy whose home now houses FIVE pianos (and a pipe organ) (and who knows what’s hiding in the garage) 🤘🏼🤘🏼